Mumbai (AGENCY) 16 April  Adding flavor to the ongoing election campaign, noted Bollywood actor Salman Khan’s father and scriptwriter Salim Khan launched Narendra Modi’s official website in Urdu on Wednesday. Launching the website, Salim Khan spoke pro Modi saying that Muslims will be safe if he comes to power in the Lok Sabha elections. He also gave Modi a clean chit for the Gujrat riots of 2002.
The official website of the BJP’s prime ministerial candidate is already available in 15 different languages including popular Indian regional languages as well as a few foreign languages. The website gives a brief account of Modi’s life and the various reforms he brought about in the state of Gujrat when he ruled the state as its chief minister.
Shaina NC, senior BJP leader joined Salim Khan at his Mumbai residence for the website’s launch.
The launch of the urdu-version of the website has led to tweets calling this another publicity stunt by the Modi for wooing Muslim voters. 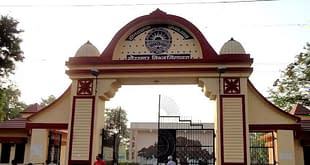